A week and a half after returning from Hong kong our next wine dinner was due to happen. What a hectic week and a half that was too. Busy in the restaurant while still having El Circo in the auditorium was a bit stressful.

For this dinner we were showcasing the wines of Brokenwood. Originally starting from vineyards in the Hunter Valley (think iconic Graveyard Shiraz and the great value Cricket Pitch wines), Brokenwood now has wines from many of Australia’s best vineyard locations (for example McLaren Vale, Beechworth, Cowra). Once again 5 courses with 7 wines. 7 wines because we have to have something with canapes and we also like to enliven the evening a bit with a Mystery wine game.

Rene and I  were very fortunate to be invited to have a tour of Brokenwood winery at Pokolbin in the Hunter Valley which was a nice end to our holiday. We also had dinner at what must be one of the best restaurants in the Hunter Valley, Muse, which is located at Hungerford Hill cellar door. While we took a few photos at the winery we weren’t able to get any at Muse due to low lighting levels. But if you get to Pokolbin you HAVE to go to Muse!! So here are a few photos from Brokenwood winery…. 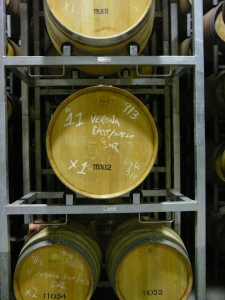 So the  Brokenwood dinner went well, apart from a few slightly undercooked wings. The salmon coulibiac was good even though it came out huge. Learnt a lesson there I can tell you, should have cut the salmon down the length which would have made smaller strips which would have been more manageable and given better portion sizes Everyone loved the chocolate pave with the drunken cherries.All the flavours of  a blackforest but with out the cake. Unfortunately no photo of the mini  drumstick, we cleared too quickly.

In two weeks time we have our next dinner which is Wirra Wirra with Negociants Australia. Looking forward to doing this as we are doing a few things that my family has at Christmas with a twist. But you will have to wait for the post on the dinner to find out what we serve. And I will make sure I take more photos.

Thanks for droppiong by for a look! V

Last week we had the opportunity to go for dinner at Tetsuya’s with some friends from overseas. Our little group consisted of 5 and we were in for a great night of dining.

The evening started with a torrential down pour around five, which meant that I had to wade through a stream (otherwise known as our street) to get to the bus stop. Thankfully it settled down to a drizzle by the time I got off the bus at QVB.

We met our first dining companion at Zeta Bar for a pre dinner drink and then made our way over to Tetsuya’s and were joined by our other two companions.

Our waiter bought us over a complementary glass of Larmandier-Bernier Champagne to get the night rolling and explained the extras we might have if we so desired. The guys ordered the oysters as Asi and Luke hadn’t tried Pacific oysters which happened to be from South Australia. Tetsuya’s serves a 9 course degustation menu which you can have with your own choice of wines or you can opt for the matched wines, which is what we decided to do.

The bread with truffle butter was so good we all had seconds:

Sashimi of king fish with blackbean and orange 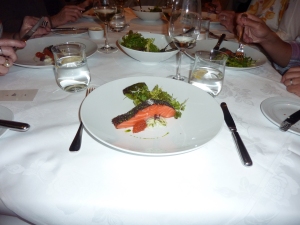 Breast of quail with paleta iberico and garlic puree

The wines we had were a great selection and included one sake:

During dinner we able to grill two of our friends on where to eat in New York in preparation for our trip next year. Great to quiz the locals on what restaurants to go to, which to avoid and things to do and see that we might not have thought of. After a fabulous dinner with great company we headed home as poor Rene had a 6am flight.