On a recent Sunday morning we had breakfast and in a fit of spontaneity decided to take a drive to the Hunter Valley. In anticipation of our annual delivery of wine from Lake’s Folly we decided to drop in and taste what we would be receiving this year. Luckily our favourite Lake’s Folly staffer, Roger, was on hand during our visit.

Our annual delivery consists of 4 bottles of Chardonnay and 8 bottles of Cabernets. Having a visit before the delivery date allows us to get a taste of what is coming and to have a chat about the vintages and the wines currently in the cellar for future release.

After tasting what we would be getting this year, 2011 Chardonnay and 2010 Cabernets, both of which we are looking forward to trying again when they are delivered, Roger took us out the back to taste this years vintage of chardonnay and cabernets.

This was to be an interesting taste. We were able to sample the 2012 vintage being matured in barrels of three different ages(ie new oak, 1 year old oak and 2 year old oak), this was a first for us. We started with the wine in the 2 year old oak, this was light and had a pleasant floral aspect on the nose with no evidence of oak characteristics and the butteriness often associated with chardonnay, was not particulary present. Loved it! Then we tried the chardonnay from the 1 year old oak, this was still quite light, the floral aromas weren’t as prominent and the oak characteristics were just evident on the nose with a slight butteriness  on the tongue. Finally we tried the chardonnay from the new oak, WOW, the oak characteristics are stronger and the butteriness quite prominent but not in an unpleasant way. This was my favourite. It was a real treat to experience how oak age affects the wine. If I could have a couple of bottles from each barrel age I would be happy. I am really looking forward to see how the 2012 vintage is after it has been blended and left to age. Only have to wait a year!

Then we tried the 2011 cabernets. This has been in cask for just over a year and will be next years release. This looks like it is going to be another great wine when it has fully developed and we are anticipating its arrival next year.

So we couldn’t leave without making a purchase and took the opportunity to grab a magnum of 2009 Cabernets. This was a great drop and the chance to get a magnum of it couldn’t be missed.

We highly recommend a visit to Lake’s Folly when you visit the Hunter, but be warned they sell out quickly and close when the current releases have sold out.

Recently our friend Helena asked if I would like to accompany her to a cocktail party accessories styling session at the new Louis Vuitton Maison here in Sydney. As I have been waiting for a special occaisson to visit the new store this seemed the perfect opportunity.

The new Louis Vuitton store has only been open a couple of months and provides a stunning claasy backdrop to showcase the brands luxury accessories.  Rene and I visited the Singapore Maison at Marina Bay Sands in January and I have to say that I prefer the Sydney Maison. The Singapore Maison is fairly open plan and your eye tends to get distracted, while the Sydney Maison is more intimate, with individual departments more seperated and you can focus on the department you are in.

Canapes were delicious with my favourite being paper thin slices of cured beef wrapped a round morsels of buffalo mozzarella. Presentation was immaculate, trays were squares of polished black stone with the interlinked LV monogram in one corner. Champagne was Veuve Clicquot in magnums. I pity the poor waiters who had to lug those around the room to top glasses up. We did our best to help reduce the weight in those bottles. Of course the glasses were Reidel etched with  Veuve Clicquot. I love a nicely etched glass. Just wish we had thought to take some photos of the canapes.

Romy Frydman of Style Me Romy, styled and presented a selection of  accessories and clothes from  the Louis Vuitton S/S collection. Several pieces caught our eyes including a pair of shoes(now residing in my closet) and a pair of retro styled sunglasses(which I needed for our trip to New York next month). Still contemplating the suitability of a tiara for day wear but it was a nice bit of whimsy. 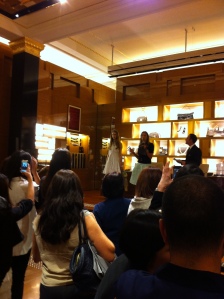 It was great to see a larger selection of watches and jewellery from LV on display. Not only do they have the standard collection in store, but several times a year they have a ‘trunk’ show come to our shores with high jewellery and watches. Scarves were artfully displayed tied over a frame which made it easy to view them up close and  get a feel of their drapability. I swear there are more shoes now than were previously displayed in the old store and the clothes department is spectacular( ask for Frank or Amy). Rene was particulary taken with the bespoke shoe service for men and the Louis Vuitton push bike.  Knowing Rene’s love of shoes and watches it will only be a matter of time before he picks something up for himself. I also got to try on some gorgeous items from the collection.

After a fabulous night all that was left was to go home and relax. Congratulations to Louis Vuitton Maison Sydney on the fabulous new store and thankyou for a wonderful night!

We stumbled across Bench WInebar while out for a Sunday afternoon walk in January. Since then we have been several times.Located on the southern end of King Street, Bench is owned by Robyn Thomas who also happens to be the owner of Pizza Picasso. Bench is located in what used to be the dining area of Pizza Picasso, and has an industrial chic look.

Cool tunes play quietly over the sound system and an illuminated colour changing wine rack in the shape of a bunch of grapes is the feature on the back wall. Bench Winebar has a great little wine list with some different and interesting wines, and price points that won’t break the budget. So far one of our favourites on the list has to be the Tar and Roses Miro Tempranillo from Spain.

As we are on their newsletter list, we recently recived an invitation to a tasting of Cullen wines, so we just had to go. Vanya Cullen is the wine making genius currently in charge at Cullen and was on hand to tell us more about the wines and the biodynamic practices that they use. The Cullen winery is located in the  Margaret River district in Western Australia. We used to steer clear of Margaret River wines, but over the past few years we have noticed that the limestone minerality that used to be quite predominant has become more subtle and the wines seem a lot fresher.

On a recent Sunday we decided to try the Cullen Diana Madeline 2007. This is a blend of Cabernet Sauvignon(60%), Merlot(30%) and Cabernet Franc(10%). This was a great drop, easy to drink and left us wishing we had another bottle. Still waiting to try the 2008 and the 2009 vintages, but there are so many great wines we are discovering lately that we just keep forgetting to buy either vintage.

We have also recently tried a bottle of their 2010 Cullen Cabernet Merlot. This is predominately cabernet with merlot and just a touch of petit verdot. This was a great drop and has room to develop with a few more years of aging. This is like a little Diana Madeline, much the same way that Penfolds 389 is considered the baby Grange.