A bit of a late start again as I was trying to sort out the camera dangling issue before heading for Mt Takao. I eventually settled on a back pack that will house up to 3 lenses, my camera, purse, phone and for when I am going on the plane, passport, iPad and the usual detritus that can be found in my hand bag. Bonus it can also be carried as a bag with handles on top. No more fearing knocking things over in shops. Thankfully the BIC Camera store was close to the station.
I didn’t have to wait long for the next train and 55 minutes later I was at Takao-sanguchi. I was able to stow my Tory Burch in a locker and head off on my hike.
I chose route 1 being the longest path. I also discovered that the whole of route 1 is paved. The terrain is a bit easier but it is still steep. It took just over an hour and a half to reach the peak 955m above sea level. There are two more difficult routes but route 1 suited me fine.  While the paving was handy being a nice level surface it takes a bit fun out of hiking. Might use one of the other routes next time.

The start of route 1

Shrine at start of route one
Apparently on a clear day you have a great view of Fuji-san from the peak. Sadly I will have to make a return trip as the day was cloudy and the mountain ranges in the distance were misty. From another part of the route up you can also get a view across to Tokyo.

The marker at the top 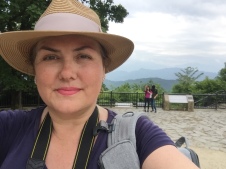 Fuji-san is there somewhere

Fuji-san is in the clouds

There were several temples and shrines, trees with unique shapes and histories. Several stairs, lanterns, torii and much more. A spectacular walk. 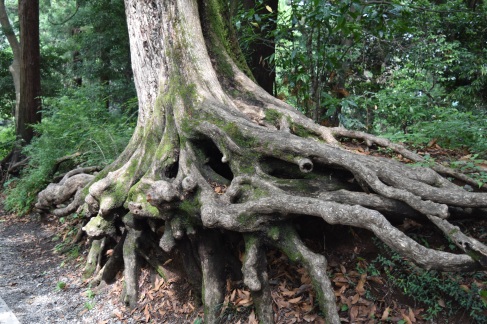 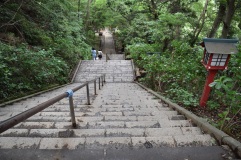 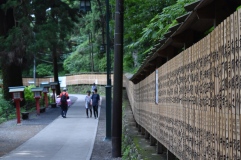 Right direction….
There were plenty of signs showing the types of wildlife on the mountain, including monkeys. There is a monkey zoo with a breeding program but I stayed on the path rather than detouring. About halfway up are the cable car and chairlift stations, food and drink stalls. I was getting a bit peckish on the way back down so decided to try Dango. A skewer with balls of rice that are grilled and then covered in sauce. Oishii (delicious)!!! 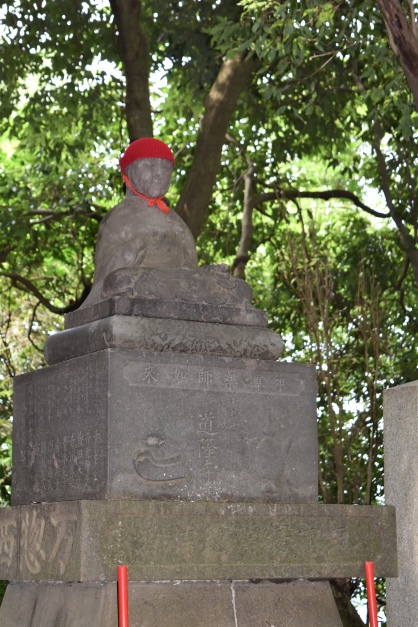 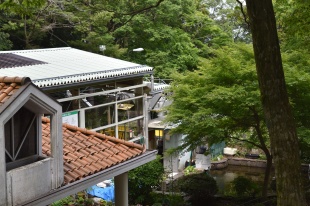 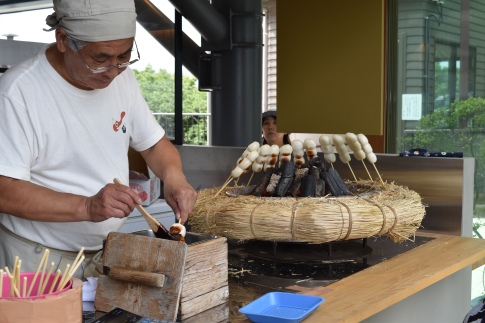 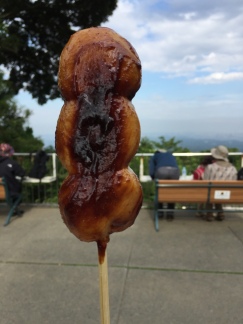 Oishii!! Dango with a view
For a bit of excitement I took the chair lift down. I have never been on one before and it was quite thrilling even though there was a level of danger to the experience. No belts or safety harnesses you just hold on to the edge of the chair.
A little walk around town revealed there is a optical illusion museum, where you can take some funky photos and a museum dedicated to the flora and fauna of the region. A lovely walk along the river took me back to the station.

Not usually seen so close together, pink and blue Ajisai

Local architecture
After washing the mud off my boots and liberating my bag from the locker, it was back on the train to return to Tokyo, a glass of umeshu and soda and an early night.
Thanks for dropping by… pop back to see more of my exploring new areas (for me) of Tokyo.
27/08/2018 0