Recently I was invited to the fabulous new HONEY BIRDETTE store in Westfield Sydney(aka Centrepoint) for an intimate(small group of 10) evening viewing their products. This is a gorgeous store with lots of lovely sexy lingerie and other ‘bits’. They are also online(see links). As part of their refreshments they offered a luxurious sounding and looking cupcake. This was my first introduction to the delicious and sensual Red Velvet Cupcake.

Featured in the film Steel Magnolia’s as an Armadillo shaped cake for the groom, the red velvet cake is often regarded  as a southern American specialty, although there are other stories as to it’s origin as well. Red velvet cake gets its colour from cocoa and red colouring with the addition of an acid which works to lessen the brown colour from the chocolate and makes the red stand out more. The acid used can vary, vinegar or buttermilk are the two most commonly used acidifying agents.

After trying this cake I was inspired to have a go at making one myself. After Googling, I had several recipes to try. As we need a dessert of the day at work I decided to make the Red Velvet cake and to take photos as I went along. (No recipe today as it is in my recipe folder at work.)

Layering complete. I made two cakes and cut each cake in to two layers. They are sandwiched with a  cream cheese filling. 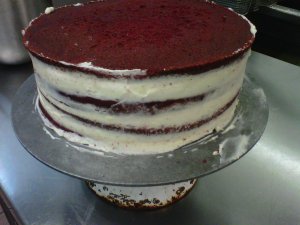 Here the first coating of the white chocolate butter cream has gone on. So handy having a revolving cake stand.

I thought it looked a bit plain so with the frosting that was left I added some pillar box red  colour and then decided to go with a random ‘ribbon’ over the surface of the white.

It would be rude of me not to show what it looked like inside and  tell you that it tasted divine. 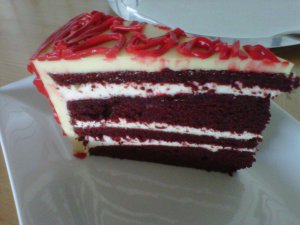 And a little something from the Honey Birdette collection:

When I make it again I think I will go with cupcake size(using a muffin tin mould). Having it as a four layer cake was delicious but just a little too rich for one person to eat alone. We also decided that it would have been the perfect dessert for the Burlesque show that had been on the week before. So next time the Burlesque show comes to work this cake will be making a come back.

Thanks for dropping by for a visit!